This is a slightly longer explication of my medium post.

Female tech founders are definitely well aware of the conversations surrounding gender these days. And let’s not kid ourselves–tech isn’t the only industry with issues around gender discrimination, harassment, or implicit bias.

I had the opportunity to attend Jason Calacanis’ Founder University with 50 other female founders this past week (which was organized by his amazing staff, including Jacqui Deegan, and graciously hosted by Wilson Sonsini).

Towards the end of two days of intense, deep learning from industry experts, Jason brought up the fact that the topic of gender discrimination was a topic that was not discussed at all (or, at least, barely. Only one person made a slight reference to it). Jason explained that he and Jacqui debated about whether or not to bring up the topic, and ultimately decided to leave it up to attendees to bring it up:

How to treat female founders

You might think “ok, another startup seminar targeted towards females. So what?” (Well, first off, it was more than that–the Launch team curated an amazing helpful (and candid) set of speakers.) But it’s just that — it was just another (really well produced) startup seminar, filled with amazing speakers, curated for goldilocks founders (post-idea, pre-Series A), that happened to be attended by founders who are female.

No talking down to us, or thinking they had to be extra nice instead of candid.

No casual ‘so, when are you planning to have kids?’ questions.

No talk about “how do I get funded as a woman?”

My point? We were treated as real founders. And that’s what we wanted. Trust me — we already know the barriers are insanely high. We already know we’re going to have to work harder than every other competitor to get noticed and be taken seriously. So the one thing I appreciated most was that Founder University gave it to us straight. We all know its a tough road ahead; that everything that could possibly go wrong probably will; that sleep will be a luxury. And because of that, we’d rather be challenged and pushed to the brink than given the ‘be nice to the damsel-in-distress’ treatment. 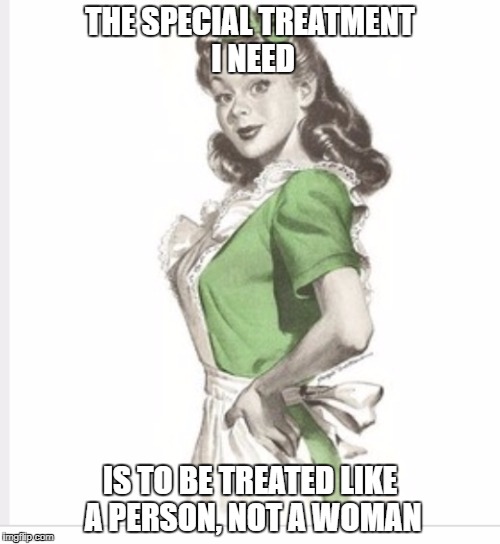 I still don’t get it. So how should I treat women?

Shortly after the news about Dave McClure broke out, I spied what guys were saying on a Facebook group about startups. One guy lamented that he wasn’t sure how he was supposed to treat women now. Another guy asked if this meant he shouldn’t date women in tech.

Guy–its really simple. Just don’t say or do anything with a female that you wouldn’t do with a guy. Or, to reverse that, don’t do or say anything that you’d be upset about if another said/did that to your girlfriend/ partner/ spouse/ significant other.

It’s the small things–like when a guy brushes a tendril of hair off your face. I’ve never seen an investor or co-worker reach across and gently brush a tendril of hair off a founder/peer’s face, pausing to rest his hand on one’s cheek. That’s the stuff of romance novels–let’s keep it that way. And don’t invite a founder/peer for late night salsa dancing and drinks, and remind them to wear a short skirt. I’m pretty sure you don’t invite your male founders/co-workers to go late night salsa dancing with you, m’kay?

I’d never sat in a room like that before. By that, I’m referring to a room full of women who had a product, had revenue, had funding, and were getting shit done. Don’t get me wrong — I know a lot of amazing, successful women. I just don’t know a lot of women founders who got somewhere in the startup world. I can’t think of more than a handful of women founders who have gotten to a Series B (I’m sure there are more than the ones I’ve heard of. But the point I’m trying to make is that its not exactly a road well traveled). Not having a whole lot of roles models (or peers) who look like you sucks. But the women in this room, by and large, had product, funding, and revenue.

I’ve come away from the experience, hopefully a little wiser, but very inspired, knowing that there are other women out there who are killing it — and supporting other women who are doing the same.

And quick, shameless plug: jason’s new book comes out July 18. If you buy it at angelthebook.com and tweet him, he‘ll give you a unicorn number and name. Mine below: